MYRTLE BEACH, S.C. | Carving out time to knock off some rush or work out a kink or two prior to a golf trip to South Carolina’s Grand Strand can frequently be next to impossible. There’s work and family, planning and packing. What happens, then, when you get to Myrtle Beach’s golf-rich environment and you’re not ready? A driving range is a good start, of course. But some folks just grasp the concept better while on the course. Finding ways to do just that can be the difference between a week of struggles or stepping up on Day 2 with some much-needed confidence. Take advantage of some tracks that won’t have you questioning if you should transition to bowling.

For 50 years, the Gene Hamm layout at Beachwood has filled a great need for players on the north end of the Strand looking for a relaxing round. There is water on 12 holes, but it only truly affects shot selection on three. And for those who tend to spray off the tee, wide landing zones on most fairways prevents you from having to dig through your bag for one more ball. Despite big dog legs on Nos. 10 and 14, the course plays mostly straight as you could ask for.

Another Gene Hamm design, Burning Ridge was originally a 36-hole site before a scale back in 2005 left what was originally the East Course to carry the banner. In addition to the closure of the sister course, the remaining 18 was renovated to remove trees and bunkers. Like most of the others on this list, the danger off the tee is more perceived than real. Landing areas are wider than they initially appear, and players who take that knowledge into the opening holes can make the most of their drivers without much fear of finding an out-of-bounds marker. Measuring less than 6,100 yards from the white tees, SouthCreek is not only the shortest of the three courses at National, it’s also a regular favorite for group trips that also package the prestigious King’s North track as part of the week’s options. SouthCreek offers the same great turf along with some creative bunker and water placement that won’t beat up anyone who takes it slow and steady. What’s more, the par 3s Arnold Palmer designed here are about as forgiving as they get.

The Myrtle Beach Golf Course Owners Association deemed River Oaks worthy of its 2015 Course of the Year distinction, and locals knew exactly why. The 27 holes here (originally designed by Hamm and Tom Jackson) have been the beneficiary of a massive renovation project that simultaneously cleaned up a course once thought to be headed for pasture status while also making it ultra-playable for everyone who set foot on the property. Tee, fairway and putting surfaces all sit well above what you’d guess given the economical greens fees.

The Dan Maples layout is the longest of the bunch, but not by a whole heck of a lot. But the 6,300 yards from the whites aren’t going to dish out too many haymakers along the way. The trickiest part of the round comes on the swing through Nos. 5 and 6. The first has a fairway surrounded on three sides by water, and the second has an island green on a 127-yard par 3. Aside from those, anything that could be considered huge trouble spots are few and far between at Willbrook. 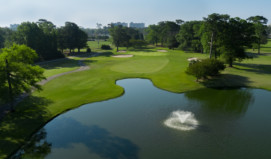 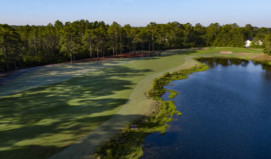 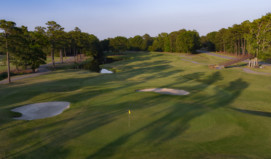