Something to Celebrate: Say Happy Birthday To These Myrtle Beach Courses

There hasn’t been a lot to celebrate in 2020, but that doesn’t mean we can’t acknowledge several significant milestones along the Myrtle Beach golf scene.

While some planned celebrations have been muted, here is a look at Myrtle Beach golf courses who are enjoying milestone birthdays this year, ranging from oldest to youngest.

60 Years Old
The venerable George Cobb designed Surf Club opened in 1960 and it quietly remains among the area’s upper crust. A semi-private facility, getting a tee time at Surf Club can be tricky, but if you get the opportunity to play, make it a point to do so. SouthCreek opened in 1975, rounding out the trio of courses at Myrtle Beach National. The Arnold Palmer design (pictured right) remains one of the area’s most popular courses, providing players good conditions and the opportunity to score.

35 Years Old
Wachesaw Plantation, the Tom Fazio-designed private course, opened in 1985. You will likely need to know someone to get on (periodically they allow limited outside play), but it’s a memorable course highlighted by the par 5 18th hole, which finishes along the Waccamaw River.

The Maples Course was the first to open at Sea Trail Resort and with five holes playing along Calabash Creek, it can be one of the North Strand’s hidden gems. Dan Maples is one of the game’s underrated architects and his namesake course at Sea Trail doesn’t disappoint.

30 Years Old
Aberdeen Country Club, called Buck Creek upon its 1990 opening, has proven to be one of the area’s most resilient courses. Aberdeen has battled back from a pair of major floods in the past five years, and with a new clubhouse and a renovated course, it’s as good as it has ever been.

Tidewater was the first layout ever named best new public course in America by Golf Digest and Golf Magazine, and the views of Cherry Grove and the Intracoastal Waterway are as stunning today as they were in 1990.

Heathland, which launched Legends Resort, was celebrated upon its opening and continues to be among Myrtle Beach’s most popular courses. One of Tom Doak’s first solo efforts, Heathland is a links-style design that features wide fairways, gargantuan greens and a lot of fun.

Opening alongside Heathland was its sister course, Moorland. The P.B. Dye design is highlighted by the Grand Strand’s longest par 3, the 220-yard seventh hole, and it’s shortest par 4, the 223-yard 16th (white tees). Gary Player’s only Myrtle Beach offering – Blackmoor (pictured right)– is celebrating 30 years and the course is always worth playing, if for no other reason than you get the opportunity to drive the eighth green (or hit the ball in the woods and make triple!).

Sea Trail’s Willard Byrd Course opened five years after the Maples. The layout plays around several man-made lakes, so it lacks some of the natural appeal of the Maples Course but it’s no less enjoyable.

Indigo Creek opened its fairways in 1995 and three decades later continues to provide players a value-priced round of golf.

25 Years Old
The area’s only Ron Garl design, Tradition Golf Club, began welcoming golfers in 1995. Tradition is the type of course that has made Myrtle Beach the game’s most popular destination. Good layout, good conditions and good value are a winning combination.

Barefoot Resort was Myrtle Beach’s most highly anticipated opening and now the Fazio, Love, Norman and Dye Courses head into their third decade better than ever. In a year that featured high profile openings, International Club (pictured right) flew under the radar, as it continues to do. The recipe for success – provide an enjoyable round of golf at a player-friendly price point – at International hasn’t wavered in 20 years.

15 Years Old
The Members Club at Grande Dunes, which is undergoing a renovation this summer, started as a private club but has recently opened for public play. The Nick Price design certainly provides the member for a day experience, beginning with a layout that is always in pristine condition. 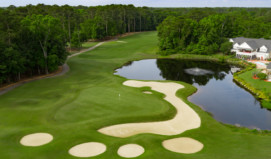 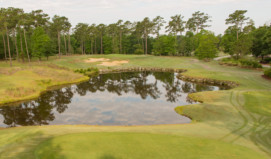 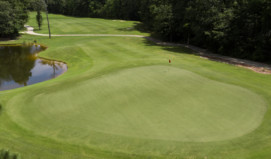 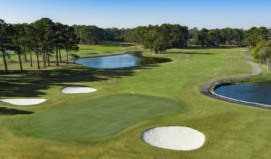