Have You Played The Nine Myrtle Beach Golf Courses Designed By Masters Winners?

The 2020 golf season is going to be “unlike any other,” but at least the game’s major championships, sans the British Open, will be played. We will have to wait an extra seven months for The Masters, but to help tide you over, here is a look at the nine Myrtle Beach golf courses designed by men who have worn the green jacket.

With six holes that play along a tidal marsh, Pawleys Plantation (pictured above) combines stunning natural beauty with the Golden Bear’s design work to produce one of the area’s most memorable courses, highlighted by the par 3 13th hole, which plays to a peninsula green.

Long Bay, an inland layout, is absolutely the architectural equal of Pawleys, and both are among the area’s top 20 courses. The back nine at Long Bay is superb, beginning with the short par 4 10th, which features a fairway surrounded by a sprawling waste bunker, and the dogleg right 18th hole, a daunting finish. 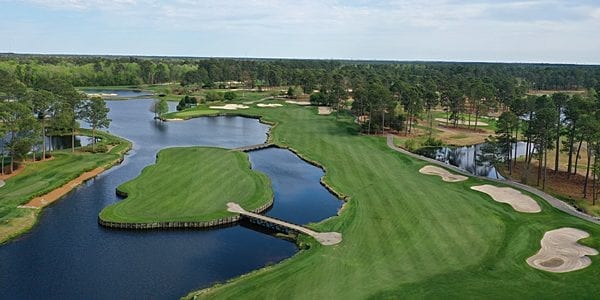 The West Course and SouthCreek have lower profiles, but both deliver a strong round of golf and outstanding conditions, making them an ideal complement to King’s North, which has been ranked among “America’s 100 Greatest Public Courses.”

Rivers Edge, which plays along the Shallotte River, has also been ranked among the nation’s top 100 public courses and is on any short list of the Grand Strand’s most scenic designs. A round at Rivers Edge requires a drive, but it’s worth the trip.

Three-time Masters champion Gary Player designed Blackmoor Golf Club, (pictured below) an underrated course that features what might be the area’s most intriguing risk-reward decision. The par 4 eighth hole can be played as a conventional dogleg right par 4 or players have the option to play through a chute in the trees, turning it into a drivable, 270-yard challenge.

Raymond Floyd slipped on his green jacket in 1976 and later went on to design Arrowhead Country Club, a 27-hole facility that is one of just six courses that play along the Intracoastal Waterway. In addition to the holes along the water, Arrowhead is most known for outstanding year-round conditions.

Fred Couples, who won his only major at Augusta National in 1992, designed Carolina National, a 27-hole property that is the northernmost course along the Grand Strand golf scene. The property offers unforgettable views of the Lockwood Folly River.