Want A One-Course Site For A Mini-Tournament? Give King’s North A Try

MYRTLE BEACH, S.C. | One of the big allures of Golf Capital, U.S.A. is the array of courses.
Options gallore, variety abound.
What if we told you that three consecutive days at one course could be just as glorifying? Within South Carolina’s Grand Strand golfing mecca are a number of courses where a multi-round mini-tournament among friends would yield different results depending upon how certain holes are played. Dunes Golf & Beach Club. Tidewater Golf Club. Grande Dunes Resort Club.
They’ve all hosted their share of junkets in which this happens every year.
We know you don’t believe us. So we wanted to give you and your friends one hit-by-hit example of how y’all could park yourselves on a track and put together one heck of a challenge that defines exactly what a golf marathon would entail.
It wasn’t hard to find that type of course here.
Myrtle Beach National’s King’s North track is fast approaching 50 years of play, and the Arnold Palmer track was built and then re-designed with return trips in mind. Below, we’ve given our reasons why, with examples of how eight holes would shape a multi-day event for even the smallest group of competitors.

No. 2 – Par 4, 371 yards
The further left off the tee you can get, the better off you’re going to find yourself on this slight bend to the right. Big hitter have struggled here, as they frequently hit into the furthest reaches of the pocketed waste bunker that stretches across the approach for the rest of us.

No. 3 – Par 4, 319 yards
So many players here get scared off by the catch bunker on the other side of the oversized pond that they completely lay up and attempt to hit into the seemingly safe fairway off to the right. The problem is that many of those same safe players still find either that aforementioned bunker just the same of the far wide one to the right since it’s sort of an awkward distance. No. 5 – Par 4, 301 yards
It’s 240 yards to clear the bunker in the rough on this dogleg. Sure, most of us can’t hit that distance consistently, but if you’re going to have three shots at it, might as well try it once, right? Otherwise, shelf the driver here and do your best to reach par.

No. 6 – Par 5, 497 yards
The Gambler wasn’t named that without reason. Everyone is going to try for the island fairway. And most players would do it all three days (the chance at an eagle putt doesn’t come that often, after all). But anyone going the conventional route can all but eliminate a chance for a drop here. Someone with a hefty lead in a tournament would have some thinking to do.

No. 11 – Par 4, 389 yards
And excellent tee shot here leaves players with a gut shot right up the middle of two green-side bunkers into the promised land. And thanks to the high-end playing surface under your feet, you can punch up and hope for a good run if you place that driver just right. Without it, you’re flying either of the two bunkers.

No. 13 – Par 4, 379 yards
During some parts of the year, the trees on the property are especially thick, but heat does a number to the pines, so that means a cut-corner opportunity at others. Shave off one luck tee shot, and you may be the only member of your group with a wedge into the green.

No. 14 – Par 4, 384 yards
A lot of players avoid the attempt at sailing the waste bunker up the front left side, as too much or too little muscle can lead to serious trouble. However, clearing it successfully is the only proper driver shot here. Otherwise, it’s a lower wood or iron and distance.

No. 18 – Par 4, 367 yards
Bunker heaven is going to destroy a few scorecards every single day here. There are more of them than many first timers have ever seen. But if you’ve played here three days in a row, your confidence in hitting fairway and then a mid-iron into the green – all while avoiding nearly 40 traps – may be the deciding factor in a mini-tournament victory. 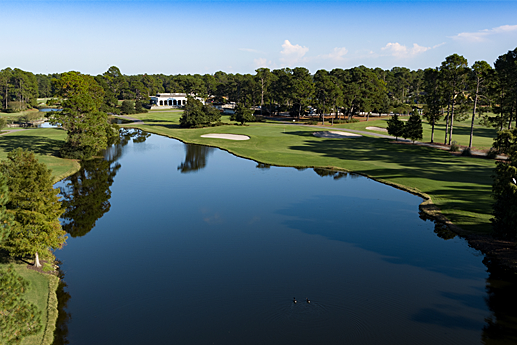