We all like to unsheath the TaylorMade M5 and bust it as often as possible, but some layouts dictate we approach the tee box with more caution than others. A tree-lined course doesn’t require golfers to leave the driver in the bag, but it does mean discretion is occasionally advisable.

Here are five of Myrtle Beach’s tightest courses, otherwise known as places where you want to take your errant-driving buddy for a money match.

— Doglegs of varying degrees of severity make up nearly half the holes at Blackmoor Golf Club, and native Carolina pine trees line nearly every fairway. Gary Player, one of the game’s legends and the architect of Blackmoor, also cut a chute through the trees on the par 4 No. 8, dramatically reducing the distance of the hole. Of course, reaching the green requires threading Myrtle Beach’s tightest fairway needle with a driver.

— Another of the game’s legends, Jack Nicklaus, rewards accuracy with the driver at Pawleys Plantation, one of the area’s prettiest courses. Whether it’s the tidal marsh that comes into play along the back nine or the Carolina pines that lurk just off the fairway, golfers wanting to post a good score at Pawleys better hit the big stick straight.

— The front nine at The Witch (pictured above) plays around a cypress swamp, increasing the importance of hitting fairways, and the home nine plays through the area’s native pines. The Dan Maples design is one of the area’s most underrated courses, but if you want to cast a spell on this Witch, you better hit the short grass, lest you will leave the woods cursing.

— Litchfield Country Club was the first course in Pawleys Island, opening in 1965. The layout features a classic design players continue to adore, but narrow corridors and small greens mean players need to be accurate off the tee. If that means tabling the driver, so be it. Either way, players love the course.

— The West Course at The Pearl adds another Dan Maples design to our list. The opening nine is the much tighter of the two sides, but if you spray the ball early, it may not matter that the course opens up down the stretch.

Don’t let tight fairways be a deterrent to playing any of these layout – they are all enjoyable – but it is worth spending a few extra minutes on the range tuning the driver up. 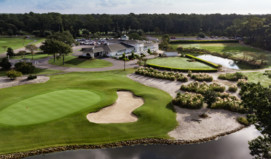