The closure of John Daly’s Wicked Stick Golf Course in 2015 eliminated one of the Grand Strand’s perceived attractions for big hitters.

The 6,900-yard Daly tees there, though, were somewhat of a farce when it came to those who were adept with the driver. Before and after Wicked Stick’s closing, other tracks in the area had established themselves as true length courses. It isn’t completely necessary to have 325-yard power to succeed at any of these, but it certainly doesn’t hurt your chances.

Some offer pure distance; others provide opportunities to muscle up with less chance for disaster. Either way, it’s time to eat your Wheaties and go to work. Eagle Nest was already a respectable length at 6,900 yards from its back tees. That wasn’t enough. After a second major renovation in the last 15 years, the course is boosting that total to an eye-popping 7,900 yards, a figure that will make it not only the longest in the Myrtle Beach area, but also the state.

The change was meant to attract the biggest hitters, something that was already being accomplished by a No. 17 that previously measured 616 yards. The new, daunting distances aren’t meant to be easy, something the course recognized when it decided to redesign itself into a championship distance.

If distance is the conversation, it would be impossible not to include Farmstead. Overall, the course has plenty of distance throughout, including the three par 5s that all measure north of 540 yards. What turns the most heads, however, is the mammoth 767-yard par 6 (pictured above) that closes out the day in one state and ends in another.

After curving into South Carolina for a number of holes, No. 18 brings you back into the Tar Heel state after teeing off on that signature hole. Big hitters have an advantage, obviously, and you wouldn’t be the first person in the history of the hole to attempt to hit the driver off the turf on your second shot. When Tom Doak laid out Heathland, he did so with the mindset of something different. Instead of heavy tree lines or the super-thick grasses that are somewhat prevalent at Legends’ other two home-site tracks, much of the groundwork was leveled somewhat to allow for the open-design breezes to further affect the 6,800-yard, par-71 design.

That element – trees are really only an issue on five of the holes – opens up the first shot for the driver time and again. For those who are relatively accurate with the big dog, it can be the difference in five or even 10 fewer strokes in a hurry. The slight difference between the standard (magenta) and back (dark teal) tees at Wild Wing’s Avocet course have inspired more than a few players to try their hand from the furthest reaches. Avocet’s back tees push players only another 500 yards, or an average of another 30 or so per hole. That’s the short answer as to why power can be so important on the 7,100-yard round.

The more specific one, however, is that reaching all but maybe one of the course’s par 4s in regulation can be considered as close to automatic as possible. That’s highlighted by the 308-yard No. 14, where the truly fortunate can reach the green in one. 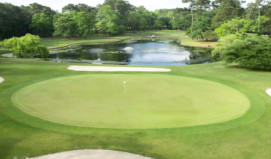