MYRTLE BEACH, S.C. | Institutional knowledge can’t be forgotten, no matter how many rounds over the years start to run together.

After a few hundred all around Golf Capital, U.S.A., trust me when they say that many have done just that.

It’s difficult to discern what numbers I put up where. I tend to remember the good holes and bad just the same. However, when folks ask me about the courses where I have the most fun, I’m not usually talking about the final scorecard figures at any of them. Golf was imagined to be enjoyed.

These are among the Myrtle Beach courses where I feel comfortable offering a guarantee exactly that will happen for you, too.

BAREFOOT RESORT & GOLF LOVE COURSE, NORTH MYRTLE BEACH (pictured above)
When Golf Channel’s now-discontinued series “Big Break” took it’s show to Myrtle Beach in 2014, one of the stops was at the Love Course, I was more than excited to be putting together content recaps for those who didn’t have the capabilities of watching the episodes live. And a big part of it was the parts dedicated to this Barefoot track.

The Ruins here are one of those iconic memory makers that anyone who visits our golf-heavy area can appreciate. It doesn’t matter that they were constructed in late 1999 and early 2000 just prior to Love’s opening. For a handful of holes, they are all the rage. And that’s more than enough for me.

GRANDE DUNES RESORT COURSE, MYRTLE BEACH
Wide-open layout? Yeah, I’m all about that at Grande Dunes. There aren’t many grip-it-and-rip-it courses still available in Myrtle Beach. But this one is, thanks to huge fairways that allow anyone who isn’t the king of the slice to shave some of this huge distance off the card throughout.

Very few people around the Myrtle Beach golf scene will tell you that, as they’re afraid it will take away from so much of the luster that Grande Dunes simultaneously presents. First timers and regulars alike are going to be be wowed each and every time they set foot on the property. Waterway views, including the marina across from Nos. 9 and 10, and the sweet shot on the Par 3 No. 14 are everything you’d want and more.

Anyone who teed off a round with me wouldn’t be too shocked to know that one of my last rounds at River Hills ended up with a flat 100. I don’t shoot many of those these days, as my approach to the game has changed and the big-time mistakes have decreased. However, when I got to River Hills that day, I was so enthralled by the sheer amount of water that I just sort of decided to go for it.

With water touching 13 of the 18 holes and in play on most of those, I just couldn’t help myself try something new – flying it forced carries one stroke early, hugging the edge of water lines up either side and basically just trying to forget how much golf balls can cost. I looked down at the scorecard after the fact and didn’t even care. It was something different, and I was happy I at least gave it a shot.

TRADITION GOLF CLUB, MURRELLS INLET
Ron Garl’s layout would carry much more weight in another market, one that wasn’t loaded with 90 or so courses in such a small area. There are brand spanking new greens and some not-so-noticeable touchups that only keep making this place better. To me, it boils down to two bigger reasons.

First, Tradition is a testament to pure playability without just being easy. We have those types of courses, here. But at Tradition, you have to think, or else the shots can and will get away from you. Second, most of the holes are going to have you feeling like you’re in the middle of the woods all by your lonesome. Those two facts play off each other time and again, as you’re able to focus on the task at hand while just enjoying the game.

WORLD TOUR GOLF LINKS, MYRTLE BEACH
When I moved to the Myrtle Beach area in 2005, I would have told you that English Turn was in Great Britain and the Olympic Club was God knows where. Sure, I knew about Augusta National and St. Andrews, but a student of the game I was not. I mention all that because World Tour is just a fun layout, even if you don’t know it from Adam Scott.

The trek around the globe – with holes from the States and Canada across the pond to England and Scotland – was a pure gamble by original designer Mel Graham, a guy who may have had problems down the line but first put together a sweet layout in this replica course. I love playing here because of the variety from hole to hole, as you’d expect from something that is patterned from a conglomerate of 14 different courses. 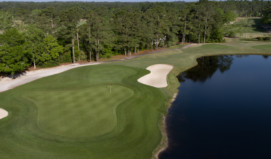