Which is the hardest course in Myrtle Beach? Most answer with a subjective opinion but we referred to the data before hitting you with a list of Myrtle Beach’s biggest challenges.

We went to the USGA’s slope rating numbers, which measure a layout’s difficulty for a bogey golfer as compared to a scratch player.

Given that the average male has a handicap of 16.1, according to Golfweek.com, an index that roughly equates to an average round of 90, we thought using slope rating was the best place to start (Since most players don’t have an official USGA index, it’s safe to assume the true average score is considerably higher).

With that in mind, here are the area’s five most difficult courses from the white, or most commonly played, set of tees:

2. Dunes Golf & Beach Club (135/70.6) – The area’s best layout is also one of its toughest. The Robert Trent Jones Sr. masterpiece offers wide fairways but cavernous bunkers and diabolical greens complexes keep players on their toes throughout an unforgettable round.

T. 3 Diamond Back Golf Club (133/71.2) – You expected a course named Diamondback that has the average golfer playing from the Rattlesnake tees to be easy? The layout is long at 6,390 yards and tight, but with recently installed greens, it should be in good shape and the design is solid. Golfers looking for a good test and a value price can do a lot worse.

T. 3 Founders Club (133/71.2) – Nestled among the lowcountry beauty of Pawleys Island is Founders Club, a layout that features elevated fairways and waste bunkers that frame nearly every hole. Stay out of the sand and Founders Club will play softer than the slope rating suggests, but if the driver isn’t cooperating, buckle up.

T. 3 Heathland, Parkland, Moorland at Legends Resort (all three have a slope rating of 133) – The trio of courses at Legends, improbably, have the same rating, but they arrived at the number in different ways. Moorland was once hailed as one of America’s 50 hardest courses by Golf Digest, but the P.B. Dye design has enormous fairways and greens, similar to Heathland, a links style-design crafted by a young Tom Doak. While the USGA deems the three to be equally difficult, locals lean toward the tree-lined Parkland as the most demanding of the trio.

Agree with the USGA’s ranking of Myrtle Beach’s most difficult courses for average players? Let us know what you think. 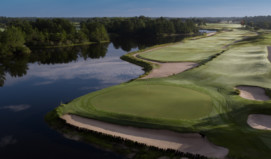 Choose from 5 Legendary courses and save