Dan Schlegel and his team installed new Sunday Ultradwarf Bermuda grass greens and restored the putting surfaces to their original dimensions, an effort that expanded the course’s greens by 28 percent. The larger greens elevated the number of pinnable locations and made the Edmund Alt design much more dynamic. Every bunker on the course was renovated, restoring shape and character that had been lost over the years. The bunkers, while not necessarily larger in size, are much more visible along the fairway, challenging players taking aggressive lines, particularly on par 5s.

“I’m really excited about the way the course looks,” Schlegel said. “We were able to revise the fairway bunkers and the impact they will have on play, so golfers will have to think about how they want to play shots. We were able to restore the greens to their original shape, and everything will be in perfect condition. The Palmetto will be like a new course.”

“The Palmetto Course at Myrtlewood looks great,” said Justin Binke, Founders Group International’s director of sales and marketing. “Golfers will love the new look, and this project reflects Founders Group International’s long term commitment to delivering the best golf vacation experience possible. We are delighted to welcome players back to the Palmetto Course for the always popular fall season here in Myrtle Beach.”

Players familiar with the course will notice the enhancements throughout the round, most notably on the 18th hole, which plays along the Intracoastal Waterway. Schlegel shifted the fairway bunkers and the sightlines from the tee, allowing players to see more of the hole and the waterway, which will enhance the visuals on the Palmetto’s most dramatic hole. The decision to hire Schlegel Golf Design was a natural one for FGI. Dan Schlegel previously worked for Ault, Clark & Associates (formerly Edmund Alt, LTD), the company that designed the course, and he was part of a team that completed a pair of projects at the Palmetto Course in the 1990s.

Myrtlewood Golf Club is a 36-hole facility owned by Founders Group International, the Myrtle Beach area’s largest golf course ownership group. The Palmetto’s sister course, PineHills, underwent a similar project in 2018 that has been met by rave reviews. The renovation of the Palmetto Course is a continuation of FGI’s commitment to the Myrtle Beach golf industry. In the last two years, six of FGI’s 22 courses have been the beneficiary of significant capital improvement projects In 2018, Tradition Club and Myrtlewood’s PineHills Course underwent renovation projects that included new greens, and FGI installed the Better Billy Bunker system at TPC Myrtle Beach. In addition to the work at the Palmetto Course, the company also remodeled the clubhouses at Aberdeen Country Club and River Hills Golf Club in 2019. 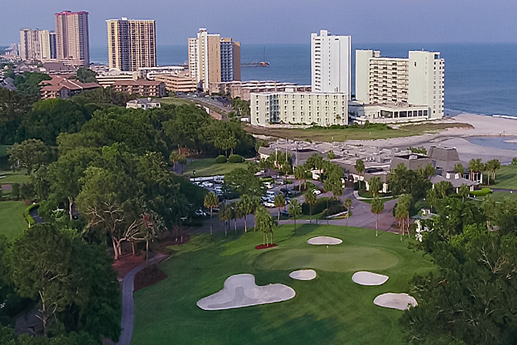