Golf Balls Beware: 5 Myrtle Beach Courses Where You Are (Almost) Guaranteed To Lose A Ball

Nobody likes losing golf balls – the penalty stroke doesn’t help the scorecard and the $4 cost of a Pro V1 hurts the wallet – but it’s part of the game, particularly in a destination like Myrtle Beach where water is abundant.

Some of Myrtle Beach’s most scenic golf courses bring the greatest risk of losing balls, so the cost of an extra ball or two is a small price to pay. With that in mind, here are five courses where you are most likely to lose at least one ball on your next Myrtle Beach golf trip. Inlet, the risk of losing a ball is certainly greater than normal. The course’s inland holes have plenty of water too. The hole to be especially wary of is the par 3 12th, which includes a 140-yard forced carry. When the wind is swirling off the nearby Atlantic, the tee shot is among the course’s diciest.

— If Tidewater isn’t the Myrtle Beach area’s prettiest course, Pawleys Plantation is, especially the stunning back nine where five of the final six holes play along a tidal marsh. Of course, along with the marsh comes danger to golf balls. When you walk to the 13th tee – a short par 3 playing to a peninsula green exposed to water on three sides – it’s best to have two balls in your pocket.

— Man O’War Golf Club was constructed around a 107-acre lake. In fairness, the course is plenty wide and the greens are large, but when you are the only layout in America with back-to-back island greens and you have an island hole – the par 4 ninth – losing a golf ball or three is almost inevitable. That being said, Man O’War (top photo) is a unique layout that is fun to play.

— Glen Dornoch (pictured right) has five holes that play along the Intracoastal Waterway, fairways that are tight in spots, and marshland that must be navigated on

the interior holes. Add it all up and it might not be a bad idea to grab an extra sleeve of balls before leaving the house. The hole to start worrying about right now: No. 16, which kicks off Glen Dornoch’s unforgettable finishing stretch. Water interrupts the 16th fairway, ensuring everyone has a 170-yard approach to a green bordered by water along the right side. It’s a terrifying shot.

— Architect Dan Maples crafted a masterful design on a 600-acre Pawleys Island property, allowing players to enjoy centuries old oak trees and a layout that plays around freshwater lakes and marshes at Heritage Club. Golf Digest has ranked the layout as high as No. 33 on its list of “America’s 100 Greatest Public Courses,” but your golf ball will be nervous throughout the round, most especially on the 14th tee as you decide how much of the water you want to challenge on the par 4. 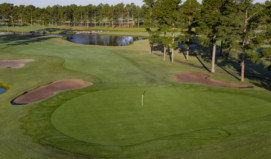