For some, it’s the rush of excitement. For others, it’s the tie to a time before man.

The emotions of a run-in with an alligator on a golf course can fall anywhere on the spectrum, but indifference is almost never an option. Especially for those who travel to South Carolina’s Grand Strand from a part of the country where the encounters only happen in a zoo, seeing one in the flesh – and without plexiglass in-between you and the beast – the experience can be of the once-in-a-lifetime variety.

It’s why a video from a golf course along the southern coastline of the state of a 12-foot behemoth meandering across a fairway went viral in June of 2017. For the few moments of a live encounter, players forget they’re standing on a golf course, the fight or flight (or bite) instincts a mere notice from taking over given the wrong provocation.

In and around Myrtle Beach, several courses have become nesting grounds for alligators. Matt Daly likes to point out alligators have been on the planet for millions of years for a reason. Occasionally, he and his staff will remind the players visiting the course that they’re in their world. At TPC, where Daly serves as the head golf professional, multiple alligators migrate from one pond to the next throughout the year.

Frequently, there is at least one on the left-side pond lining the final chunk of yardage on the prestigious 18th hole. With the backdrop of the beautiful clubhouse overlooking a fantastic finisher, many don’t even notice the alligators sun-bathing on the bank closest to the green. Others have no choice but to take notice.

“It is mostly because they are intimidating to look at, whether they are on land or swimming in the water,” Daly said. “We don’t get to see predatory animals of this size in nature very often. What amazes me about golfers and alligators is without fail every year we will have guests playing that don’t believe that they are real. So they try to get up close to them.”

Just across the border in North Carolina, it is at times easier to list the holes where at least one alligator isn’t residing.

“They’re sort of everywhere,” Head Golf Professional Tim Jackson said. “Any water that we have around here pretty much has alligators in it. The pond on 1 and 2, there’s a couple good ones in there. There’s some on No. 3.”

It is there that the club’s most notable of the group hangs out and announces her presence with authority. During the hatching season (late summer) and breeding times (late spring), she’ll growl – as Jackson put it – at those who breach her zone of comfort. He also said that most of Oyster Bay’s resident alligators take advantage of the cooler temperatures in October and March for any necessary repositioning, a time he called the “killer season” for gator viewing – no pun intended. The moniker “Alligator Alley” at Dunes isn’t some disassociated nickname.

Nos. 11, 12 and 13 holes here cut around the left edge of Lake Singleton, a prime nesting area for 10 or more alligators at any given time, with others popping up at other ponds around the course.

It leads Dunes to have its share of fearless golfers.

“I always chuckle when I see guests sneaking up to take pictures of the gators from about 15-20 yards away. I envision what would happen if you took that same person and threw them over the wall at Alligator Adventure,” Dunes Head Golf Professional Dennis Nicholl said, mentioning the nearby reptile exhibit. “They likely would be screaming and clamoring to get out of the enclosure and frightened for their life. Yet there is something about the tranquility of the golf course that changes golfers’ perspective of the gators from the basic human instinct of fear to curiosity and pure amazement.”

Certainly, the animals have been embraced at the second-oldest golf course in the Myrtle Beach area. The trophies for the Dunes Club Course Championship each year are alligators with golf balls in their mouths.

Pond of one, pond of all.

That’s the strategy employed at Willbrook, where nearly all of the water connects to form a mini-river of sorts that dips and dives throughout the former plantation land. The alligators here have free reign to move from one section of the course to the others. The biggest of the bunch is a 12-footer who routinely hangs out near Nos. 5 and 6. It is there, especially during his sunning time in the cooler months, that the already history-laden course adds another living, breathing piece of the past.

“I imagine that people that live in areas without alligators are enamored with the opportunity to view them,” Willbrook’s Head Golf Professional, Kevin McGuire, said. “The dichotomy of pristine golf property versus the prehistoric qualities of alligators perhaps also perpetuates the excitement. One could also equate an alligator sighting to that of viewing a solar eclipse for some people.”

The king of the fifth and sixth holes is joined by plenty of others. Babies join the fold annually, and more than a dozen adults have been spotted at one time near a single pond.

Check Out the Gator Package, A Collection of Premium Designs Where You MIght Even Spot A Gator During Your Round! 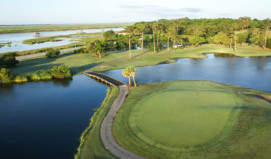