Best of the Golden Bear: 3 Holes at Long Bay You Won’t Forget

It’s not fair but such is life. Located on Highway 9, just west of the coast, the trip to Long Bay is easier than ever on Highway 31, and the layout, defined by ample mounding and waste bunkers, is more than worth the short drive.

In a survey of more than 50 Myrtle Beach area PGA professionals, Long Bay was ranked as the area’s 20th best course, a testament to the quality of its design. At the heart of Long Bay’s allure is the challenge it provides.

(We won’t talk about the tips because only a fraction of the golfing population should be playing from 7,000 yards.) If your next Myrtle Beach golf trip brings you to Long Bay, here are three holes you will be telling your friends about.

● Long Bay gets off to a bruising start as holes two, three and four represent the course’s most difficult stretch, highlighted by No. 4. The day’s longest par 4 (443 yards blue tees/419 whites) demands power and precision. The fairway – which offers 50+ yards of width – is framed on both sides by waste bunkers and it’s an intimidating look, doubly so when you know you have to swing aggressively. Survive the opening stretch and a good score should await. (photo right)

● On the opposite end of the spectrum is No. 13 (140 yards/123 yards), a par 3 that is Long Bay’s easiest hole. The 13th is an island green and it offers the opportunity for a routine par or even a birdie. While players don’t typically associate an island green with easy, you can hit a short iron and there is plenty of room to land the ball, meaning the biggest hurdle is not letting the water impact you between the ears. (top photo) 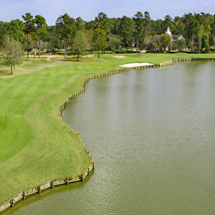 ● It’s impossible not to talk about Long Bay’s par 4, 18th hole, a dogleg right that plays around a lake. It’s a great hole to finish a round (or a match) on. There is a risk-reward decision involved – how close do you want to get to the lake off the tee? – and the approach, especially when the pin is on the right side of the green, brings water into play, making it day’s most dramatic. The 18th provides a riveting finish to a round on one of Myrtle Beach’s most underrated layouts. (photo right)