$250,000 Lost, Mounds of Dirt and a Success Story: Behind the Scenes of Shaftesbury Glen’s Renovation

It was late fall in 2015 and rain seemed to be following Shaftesbury Glen general manager Ryan McCarty. The area had been hit by a freakish October storm that dumped 20+ inches of rain on the Grand Strand in a little over two days – the Thousand Year flood they called it.

It continued to rain periodically in the aftermath of the biblical deluge, and Shaftesbury wasn’t drying out. As a result, every time McCarty had to relegate players to keeping carts on the dreaded path, the tee sheet emptied.

How bad were things? By McCarty and course superintendent Dave Kingsland’s count, Shaftesbury Glen lost in the neighborhood of $250,000 in greens fees due to cart path only conditions in 2015.

Instead of complaining about their losses, the duo decided it was time to rectify the problem. Residing west of the beach, Shaftesbury was built on clay, which meant it didn’t drain as well as the sand-based courses closer to the coast. McCarty is a fan of the restoration of Pinehurst’s famed No. 2 course, something that led him and Kingsland to decide on new drainage and the installation of waste bunkers throughout the property to solve Shaftesbury’s issues (no, we aren’t comparing Shaftesbury directly to No. 2, just the idea that sand was a more than suitable replacement for traditional rough).

Once they settled on a plan, they wanted to implement it immediately with the course’s wettest holes being addressed first.

They pitched the idea to Paul and Jack Himmelsbach, the course’s owners, and the idea was well-received. One of the driving forces behind Myrtle Beach’s growth as a golf destination, the Himmelsbachs were all-in on an aggressive, pro-active approach to a problem everyone knew they had.

The Shaftesbury team reached out to the course’s architect – Clyde Johnston – and received his blessing to make changes, but there was no architectural guidance.

The project, which began on December 26, 2015, was powered by McCarty, Kingsland, Google Earth and years of accumulated knowledge. In phase one, McCarty and Kingsland made the decision to remove cart paths, install waste bunkers and new drainage on the course’s wettest holes, using Google Earth to plot the work.

The Shaftesbury staff morphed into laborers. They arrived at the course each morning at 6:30 a.m., reviewed the day’s goals, and went to work. McCarty, who just weeks earlier was sitting in an office, was learning to drive a tractor and clear land.

“We came in with big mud boots on and went to work,” he said. “It was all hands-on deck, our inside staff, cart guys; we pretty much worked maintenance for two months. It was tiresome, and it was really cold some days but we got through it.”

By March of 2016, Shaftesbury Glen was home to 250,000 square feet of waste bunkers and a state-of-the-art drainage system. The impact was immediate. The course’s wettest holes became its driest, and just as importantly, Shaftesbury had a new look. If there had been a criticism of the layout since its 2001 opening, it revolved around a lack of visuals. There isn’t much water on the property and the land was largely flat, leaving many of the holes with a similar look.

The waste bunkers took care of that, bringing visual contrast that everyone appreciated.

Aided significantly by an outside construction team, Phase I went great but it wasn’t without unexpected problems, chief among them was the amount of dirt removed to make way for the waste bunkers. With no place to take the dirt, McCarty and Kingsland used it to create mounding.

“When we first started doing it, it looked terrible and we are thinking to ourselves, ‘What are we doing to this golf course?,’” McCarty said of the mounding. “But when we opened up in March, luckily it was warm so it was greening up. Now the mounds are one of my favorite things about the golf course. We built three mounds around the 12th green and they are one of my favorite spots on the course.”

In addition to adding waste bunkers, some of Shaftesbury’s fairways were widened and green-side bunkers were shallowed out, helping ensure the level of difficulty wasn’t raised.

The success of the 2015 project, which included work on holes 1, 2 (pictured below), 7, 10, 12 (top photo), 13, 14 and 17, made Phase II a no-brainer. By 2019, Shaftesbury’s original bentgrass greens were showing signs of wear, so the decision was made to install new Sunday bermudagrass that is perfectly suited to the area’s subtropical climate. Closing for the installation of the new greens allowed McCarty and friends to finish adding new drainage and waste bunkers to a course that has a completely different look, complements of a couple guys who never considered themselves architectural buffs.

“I’ve been an avid golfer for almost 30 years, and I’ve been at (Shaftesbury) since 2002,” McCarty said. “I’ve seen it grow, the trees get a little bigger, and the layout get a little better. At the same time, I’d heard customer complaints about it being too wet or not having enough eye appeal, so it was fun to change the look of the golf course … I take pride in the fact we did a good job and golfers love it.”

A tee sheet that once emptied when it rained now finds itself gaining players on wet days, and Shaftesbury Glen is more popular than ever. 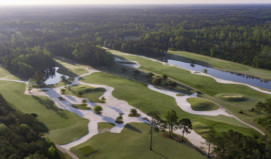