As the best of the best prepare to tee it up at the 2022 U.S. Open, we can’t help but think of our own ties to the PGA Tour major.

And while several of the players participated in events here during their amateur/college days, we’re centering around two men in particular.

From the person who re-designed The Country Club of Brookline (Mass.) – the home of this year’s event – to one of the early favorites to walk away with the trophy, the Grand Strand has two very direct links to June’s event.

BRINGING OUT HIS BEST, EVENTUALLY Arcadian Shores (top photo) opened its doors in 1974, and little did the world know then what we’d come to discover.

One of Jones’s first courses, Arcadian was a relatively simplistic design by comparison, sure. But it turned out to be ahead of its time. The playable and forgiving design included some tricks that ensured that better players were forced to make tougher decisions while the average golfer had a chance to score here and there.

By 1990, when the Jones course at Sea Trail Golf Links just across the North Carolina border in Sunset Beach launched, there was no surprise as to what Jones could do. He had taken it to the next level, proving his ability to match nature and play. He used water and mounding to help extend the Myrtle Beach golf footprint.

His finest work here, though, may have come at Dunes Golf & Beach Club.(pictured right) Following in the footsteps of his daddy, Robert Trent Jones, Rees Jones updated his father’s work to include green expansion, some added length and a refurbishment of some of the original highlights.

Keep an eye out for similarities at Brookline, which Jones doctored up in 2008. When Johnson was smoking the vast majority of his competition while playing at nearby Coastal Carolina University, there were signs of what he might accomplish one day.

The three-time Golf Coaches Association of America All-America selection and three-tie Big South Golfer of the Year routinely ended his college career with a scoring average below 73.

But he’s also locked in his Myrtle Beach golf legacy by growing the game. Johnson’s golf school, located at TPC of Myrtle Beach, has been an instrumental teaching venue for the experienced and not-so-experienced alike.

His annual Dustin Johnson World Junior, also at TPC Myrtle Beach, has helps propel some of the country’s best young players into the next level. 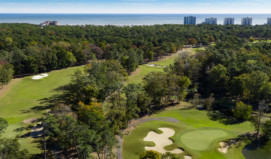