For many players, a post-round beer remains an integral part of the Myrtle Beach golf experience, but the drink of choice is certainly changing.

The days of golfers mindlessly ordering domestic suds have given way to the craft beer era, where bars offer brews as different as the games of Dustin Johnson and Corey Pavin.

For the legions of craft beer fans, here are five bars we recommend you hit on your next Myrtle Beach golf trip:

— If you want to enjoy a cold beer in a bar that feels like a local’s pub, you have to try Atlas Tap House. Tucked away in downtown Myrtle Beach (you have to look for it), Atlas has 25 craft beers on tap and more than 80 different selections in bottles and cans. They also smoke their own barbeque. You won’t go wrong here.

— American Tap House,  (pictured above) located along “The Avenue” at Broadway at the Beach, provides a more active setting as live music and dancing are just steps away from the popular gastropub. The food at American Tap House is good, there 40 beers on tap, and golfers have options galore when they are ready to move on. — Speaking of Broadway at the Beach, Liberty Steakhouse is home to New South, Myrtle Beach’s only microbrewery. New South, which is now 21 years old, complements homegrown beer with a great happy hour menu. No matter how you play on the course, a Liberty Lager and an order of cheese fries at Liberty will set you right.

— Did you ever think you’d go to a bar with twice as many beers as Myrtle Beach has golf courses? The Brass Tap (pictured right) at Market Common serves more than 200 different beers, so there is something on the menu for everyone. Throw-in an atmosphere that manages to be both casual and upscale, and the Brass Tap is an ideal landing spot for your group.

— If you are playing along the South Strand, Quigley’s Pint & Plate is the watering hole of choice. The only brewery in Pawleys Island and Litchfield, Quigley’s has eight beers on tap, the food is memorable, and so is the atmosphere. 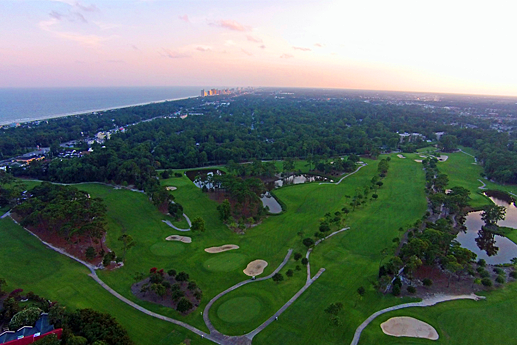 Save $5.00 per round on 10 centrally located golf courses