You can book tee times on courses designed by Masters Tournament winners. The Myrtle Beach area is home to courses built by Arnold Palmer, Jack Nicklaus, Ray Floyd, Gary Player, and Fred Couples, some of golf’s greatest players and all winners of the green jacket.

“The Grand Strand is home to a lot of great courses, but certainly those built by winners of The Masters Tournament stand out,” said Steve Mays, president of Founders Group International. “Many of the courses here are framed by azaleas, like those in Augusta.  Being only a few hours from Augusta National, you can really get a feel for the tournament on these courses, experience similar weather, and you get to play at the beach.”

Arnold Palmer has three designs you can choose from at Myrtle Beach National.  One of the courses, King’s North, offers several of the Grand Strand’s most memorable holes, including the par 5 hole, “The Gambler.” You can choose to hit the driver to an island fairway for a good chance of getting to the green in two or take the safe layup and a short approach over water for the more conventional three-shot hole. The course also delivers a dramatic ending with the par-4 18th, which features an array of 40 bunkers.  Golf Digest’s “Places to Play” has awarded King’s North 4.5 stars.

Palmer’s Rivers Edge sits along the bluffs and tidal marshes of the Shallotte River.  With five sets of tees to fit any game, you’ll find the range that best suits you. Many return, again and again, to enjoy the breathtaking views and take on the challenge that earned Rivers Edge a reputation as one of the area’s top courses.

At Jack Nicklaus’ Long Bay Club, you have to navigate a variety of bunker styles, elevations, and some shallow greens. Crystal-blue streams that cut through several holes add to the beauty and difficulty. Long Bay Club received 4.5 stars from Golf Digest’s “Places to Play.” Bordered by a 600-acre nature preserve, Pawleys Plantation Golf & Country Club is a course where Nicklaus carved out formidable par 4s, beautiful par 3s, and memorable par 5s along the marsh and creek that divide Pawleys Island from the mainland. Laid out among the 200-year-old moss-draped oaks, you’ll see why it’s a Lowcountry favorite that has received numerous accolades from Golf Digest, Golf Magazine, and other national media.

Arrowhead Country Club is Ray Floyd’s premier 27-hole golf complex along the scenic Intracoastal Waterway. It features three unique 9-hole tracks: The Waterway, The Cypress, and The Lakes, each one with a feel all of its own. They feature uncommon elevations, hardwood wetlands, Bermuda grass fairways, and Mini-Verde greens.

Gary Player’s Blackmoor Golf Club in Murrells Inlet remains one of the Grand Strand’s most player-friendly courses. Doglegs are a part of nearly half of the holes, so early club selection could be the biggest influence toward an impressive scorecard. The signature hole is number eight, a great risk/reward par 4 that plays 370 yards as a dogleg right and 270 yards going straight. If you opt to play it safe, then you should hit your tee shot straight at the elbow of the dogleg. This leaves a straightforward approach to the very large green.

Fred Couples’ Carolina National Golf Club is celebrating its 20th anniversary. The course opened in 1998, six years after Couples’ iconic Master’s victory. Drawing upon inspiration from his experiences at the Masters, Couples incorporated the Augusta “feel” at the Carolina coast. Carolina National is also an Audubon-Certified Sanctuary Golf Course, meaning it must uphold the principles of environmental stewardship such as maintaining a refuge for wildlife and a healthy environment. With three nine’s – Egret, Heron, Ibis – each with its own distinct personality, you’ll find this course was designed to accommodate all skill levels through its innovative design and multiple tee placements. 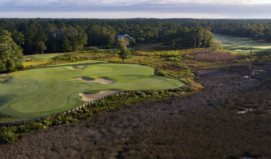